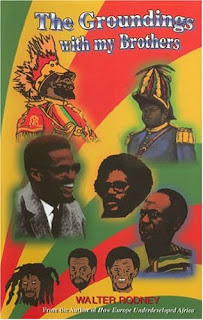 “On 15 October 1968 the government of Jamaica, led by prime minister Hugh Shearer, declared Rodney persona non grata. The decision to ban him from ever returning to the country because of his advocacy for the working poor in that country caused riots to break out, eventually claiming the lives of several people and causing millions of dollars in damages. These riots, which started on October 16, 1968, are now known as the Rodney Riots, and they triggered an increase in political awareness across the Caribbean, especially among the Afrocentric Rastafarian sector of Jamaica, documented in his book, The Groundings With My Brothers. Rodney returned to the University of Dar es Salaam in 1969 where he served as a professor of history until 1974.[2]”
“Rodney’s most influential book was his magnum opus, How Europe Underdeveloped Africa, published in 1972. In it he described an Africa that had been consciously exploited by European imperialists, leading directly to the modernunderdevelopment of most of the continent. The book became enormously influential as well as controversial.”