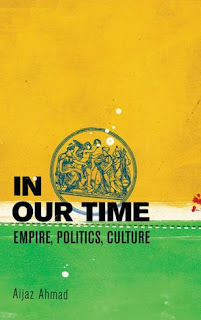 Apparently published by Verso in 2007, In Our Time: Empire, Politics, Culture is touted as the anticipated and eagerly-awaited sequel to Ahmad’s indispensable — and highly recommended — In Theory: Classes, Nations, Literatures (posted here), which brilliantly critiqued theoretical takes on “post-colonialism,” homogenized “Third-World Literature” (namely Jameson), and various colonial discourses (with an emphasis on Said and Orientalism). Unfortunately, there is nothing on this text anywhere online so far as its availability goes, casting into doubt whether it is even in print, which would be something of a major misfortune for all of us that are not only familiar with his work but consider it of extreme importance juxtaposed with Western academic theoreticians/critics. Perhaps it would spark debate were it made available, which is the purpose of this post. If anyone is in possession of any information as it pertains to this text and its availability, please give your response via comment or private ask. It seems quite strange for an important text to have so quickly fallen into obscurity (or only made readily available to academics in major universities). Thank you.
The official description of the text reads as such:

The long awaited follow-up to Ahmad’s In Theory this is a meticulous analysis of the changing face of imperialism. This long-awaited sequel to In Theory offers a set of interlocking interventions in the most urgent of contemporary debates in political and cultural theory. Ahmad offers a distinctive new analysis of imperialism in the globalised era as it slides into planetary neoliberalisation and warfare, and historically novel forms of resistance emerge across the globe. Diverse in its thematics and rich in detail, In Our Time is bound to generate as much debate as its predecessor.