Michel Foucault, Society Must Be Defended (Lectures at the College de France: 1975-1976) 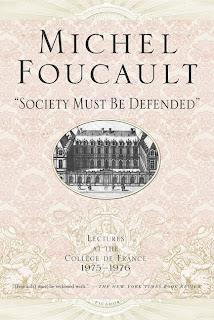 In Society Must Be Defended, Foucault deals with the emergence in the early seventeenth century of a new understanding of war as the permanent basis of all institutions of power, a hidden presence within society that could be deciphered by an historical analysis. Tracing this development, Foucault outlines the genealogy of power and knowledge that had become his dominant concern.
Excerpt:
In order to make a concrete analysis of power relations, we must abandon the juridical model of sovereignty. That model in effect pre-supposes that the individual is a subject with natural rights or primitive powers; it sets itself the task of accounting for the ideal genesis of the State; and finally, it makes the law the basic manifestation of power. We should be trying to study power not on the basis of the primitive terms of the relationship, but on the basis of the relationship itself, to the extent that it is the relationship itself that determines the elements on which it bears: rather than asking ideal subjects what part of themselves or their powers they have surrendered in order to let themselves become subjects, we have to look at how relations of subjugation can manufacture subjects. Similarly, rather than looking for the single form or the central point from which all forms of power derive, either by way of consequence of development, we must begin by letting them operate in their multiplicity, their differences, their specificity, and their reversibility; we must therefore study them as relations of force that intersect, refer to one another, converge, or, on the contrary, come into conflict and strive to negate one another.
'€”Translated by David Macey
Posted by Unknown at 10:31 AM

Email ThisBlogThis!Share to TwitterShare to FacebookShare to Pinterest
Labels: foucault