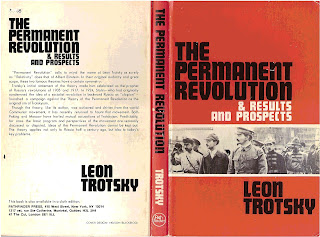 The theory of permanent revolution is one of the defining principles of Trotskyism. Leon Trotsky first advanced the concept in 1905 as the strategy for overthrowing czarism and liberating Russian workers and peasants. The theory’s relevance to global revolt later became one of the key issues in the political battle between Trotsky and the forces of conservative Soviet repression personified by Joseph Stalin.
In the two major works presented in this book, Results and Prospects and The Permanent Revolution, Trotsky showed that developing countries must achieve workers rule in order to defeat tyranny and foreign domination. He explained that if socialism is to succeed it must expand beyond national borders and transform every aspect of political, economic and human relations. Leon Trotsky was a leading Bolshevik revolutionary and Marxist theorist. He was a central leader of the October Revolution and an influential politician in the early days of the Soviet Union. He was Commissar for Foreign Affairs, founder and commander of the Red Army and Commissar of War. He led the struggle against Stalin’s bureaucratization of the Soviet Union in the 1920s. Trotsky was expelled from Stalin’s “Communist” Party and deported from the Soviet Union in the Great Purge. As the founder of the Fourth International, he continued in exile to encourage workers and oppressed peoples to unite against capitalism, and for socialist revolution.
Posted by Unknown at 11:09 AM