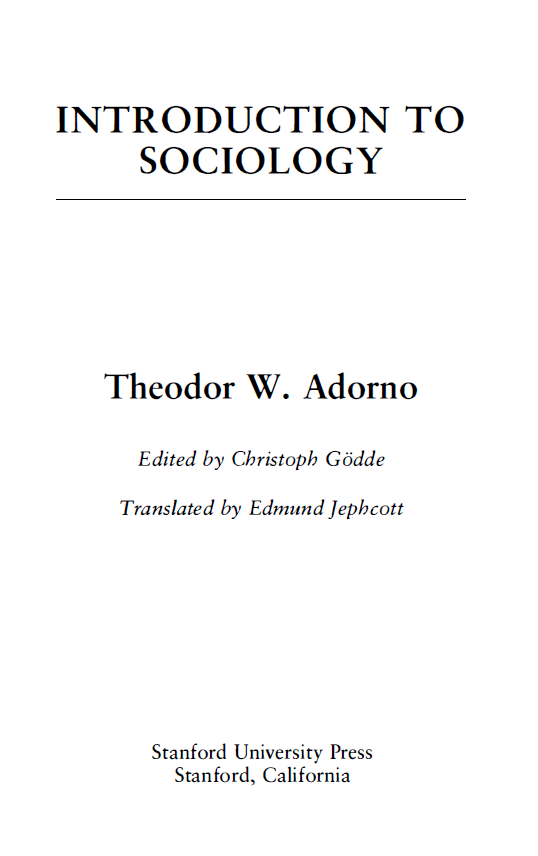 Introduction to Sociology distills decades of distinguished work in sociology by one of this century's most influential thinkers in the areas of social theory, philosophy, aesthetics, and music.

It consists of a course of seventeen lectures given by Theodor W. Adorno in May-July 1968, the last lecture series before his death in 1969. Captured by tape recorder (which Adorno called "the fingerprint of the living mind"), these lectures present a somewhat different, and more accessible, Adorno from the one who composed the faultlessly articulated and almost forbiddingly perfect prose of the works published in his lifetime. Here we can follow Adorno's thought in the process of formation (he spoke from brief notes), endowed with the spontaneity and energy of the spoken word. The lectures form an ideal introduction to Adorno's work, acclimatizing the reader to the greater density of thought and language of his classic texts.

Delivered at the time of the "positivist dispute" in sociology, Adorno defends the position of the "Frankfurt School" against criticism from mainstream positivist sociologists. He sets out a conception of sociology as a discipline going beyond the compilation and interpretation of empirical facts, its truth being inseparable from the essential structure of society itself. Adorno sees sociology not as one academic discipline among others, but as an over-arching discipline that impinges on all aspects of social life.

Tracing the history of the discipline and insisting that the historical context is constitutive of sociology itself, Adorno addresses a wide range of topics, including: the purpose of studying sociology; the relation of sociology and politics; the influence of Saint-Simon, Comte, Durkheim, Weber, Marx, and Freud; the contributions of ethnology and anthropology; the relationship of method to subject matter; the problems of quantitative analysis; the fetishization of science; and the separation of sociology and social philosophy.
Posted by RadicalArchive at 9:50 AM