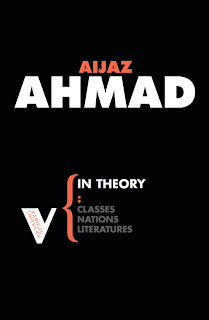 “Setting himself against the growing tendency to homogenize “Third World” literature and cultures, Aijaz Ahmad has produced a spirited critique of the major theoretical statements on “colonial discourse” and “post-colonialism,” dismantling many of the commonplaces and conceits that dominate contemporary cultural criticism. With lengthy considerations of, among others, Fredric Jameson, Edward Said, and the Subaltern Studies group, In Theory also contains brilliant analyses of the concept of Indian literature, of the genealogy of the term “Third World,” and of the conditions under which so-called “colonial discourse theory” emerged in metropolitan intellectual circles.”
Excerpt:
The brief discussion of ‘Marx on India’ in Chapter 6, the shortest in the book, is occasioned here formally by Edward Said’s attack on Marx in Orientalism precisely on the issue of India, but I also had some other aspects in mind. Polemical dismissals of Marxism, without any detailed engagement with Marx’s thought, are now a fairly common feature of French poststructuralism and of the straightforwardly right-wing ideas which have arisen in its wake. There has been, since The Order of Things, a pose of weariness and wry contempt. This is duplicated, then, in the whole range of Anglo-American literary poststructualisms — and not only literary, nor only poststructuralisms — where one routinely encounters a dense system of mutual citations and invocations of Foucault and/or Said which portrays Marx as an Orientalistic enthusiast of colonialism. A striking feature of this portrayal of Marx as an Orientalist, based as it is on some journalistic observations about India, is that it never even refers to how those same observations may have been seen by India’s own anti-imperialist historians. The key fact about the post-colonial history of the so-called Third World is that each nation-state came under the dominance of a distinct national bourgeoisie (existing or emergent) as it emerged from the colonial crucible and was then assigned a specific location in the international division of labour as it is organized by imperialism, so that the period has come to be characterized not by greater unity but by increasing differentiation and even competitiveness among these states.
Posted by Unknown at 10:46 AM