Marc Bousquet, How the University Works: Higher Education and the Low-Wage Nation 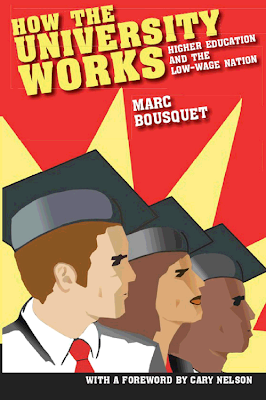 Marc Bousquet, How the University Works: Higher Education and the Low-Wage Nation

Excerpt from The Waste Product of Graduate Education:

The core of any redescription of the linkage between graduate education and the system of academic labor more generally has to begin by discarding the Fordist assumption that the situation of the doctoral degree holder can be grasped by a manufacturing analogy to production. Under casualization, it makes very little sense to view the graduate student as potentially a product for the job market: most graduate students are already laboring at the only academic job they’ll ever have. (Hence the importance for organized graduate student labor of inscribing the designation “graduate employee” in law and discourse.) From this standpoint, it has to be acknowledged that increasingly the holders of the doctoral degree are not so much the products of the graduate employee labor system as its by-products, insofar as that that labor system exists primarily to recruit, train, supervise, and legitimate the employment of nondegreed rather than degreed teachers. This is not to say that the system doesn’t produce and employ holders of the PhD, only that this operation has become secondary to its extraction of teaching labor from nondegreed persons, primarily graduate employees and former graduate employees now working as adjunct labor—as part-timers, full-time lecturers, postdocs, and so on. This essay argues that the organized graduate employee has a better description. Against the dominant second-wave heuristic of the “job market,” and as a corrective to the lapsed and too-often residual labor knowledge of the first wave of faculty unionism, a third wave of thinking about academic labor is emergent in the graduate employee union movement. While this emergent knowledge is based in the particular experience of casualization by two generations of graduate employees and former graduate employees, I hope in the next few pages to suggest that it is not only a better knowledge of the “local” circumstance of the graduate employee (because how can the graduate employee be localized, exactly? Every other “location” in the system, from perma-temp to university president, is filled by someone who has been a graduate employee) but, further, that this third wave is an emergent better knowledge of the labor system as a totality. Consistent with the insights of psychoanalytic Marxism, it is in the graduate employees’ character as incipient by-products, their understanding that the system’s constant pressure is not toward their incorporation but toward compelling their recognition that they must serve as the system’s indigestible remainder, that provides the partial standpoint from which we can most usefully and justly accept a description of the whole.

Excerpt from the “Informal Economy”:

One of the reasons that graduate employees are so vocal is becausethe transformation of graduate education accomplished by the three-decade conversion of the university to a center of capital accumulation needs to be viewed as a profound form of ‘employer sabotage’—most graduate employees find that their doctorate does not represent the beginning but instead the end of a long teaching career: as I’ve observed in another venue, the ‘award’ of the doctoral degree increasingly represents a disqualification from teaching for someone who has already been teaching for a decade or more. In the course of re-imagining the graduate student as a source of informationalized labor, the academy has increasingly evacuated the professional-certification component of the doctoral degree (the degree plays a key role in the way professionals maintain a monopoly on professional labor; however, now that work formerly done by persons holding the degree is done by persons studying for the degree, the degree itself no longer represents entrance into the profession). The consequence of this evacuation is that the old Fordist sense of the doctoral recipient as the ‘product’ of graduate education has little meaning—instead, the degree holder must now be understood in systemic terms as the waste product of graduate education—not merely ‘disposable,’ but that which must be disposed of for the constantly-churning system of continuously-replaced student labor to function properly.

As much as we think we know about the modern university, very little has been said about what it’s like to work there. Instead of the high-wage, high-profit world of knowledge work, most campus employees—including the vast majority of faculty—really work in the low-wage, low-profit sphere of the service economy. Tenure-track positions are at an all-time low, with adjuncts and graduate students teaching the majority of courses. This super-exploited corps of disposable workers commonly earn fewer than $16,000 annually, without benefits, teaching as many as eight classes per year. Even undergraduates are being exploited as a low-cost, disposable workforce.
Marc Bousquet, a major figure in the academic labor movement, exposes the seamy underbelly of higher education—a world where faculty, graduate students, and undergraduates work long hours for fast-food wages. Assessing the costs of higher education’s corporatization on faculty and students at every level, How the University Works is urgent reading for anyone interested in the fate of the university. From page 21:

Under casualization [of academic labor], it makes very little sense to view the graduate student as potentially a “product” for a “market” in tenure-track jobs. For many graduate employees, the receipt of a Ph.D. signifies the end, and not the beginning, of a long teaching career. Most graduate students are already laboring at the only academic job they’ll ever have – hence, the importance for organized graduate student labor of inscribing the designation “graduate employee” in law and discourse.
From the standpoint of the organized graduate employee, the situation is clear. Increasingly, the holders of a doctoral degree are not so the products of the graduate-employee labor system as its by-products, insofar as that labor system exists primarily to recruit, train, supervise, and legitimate the employment of nondegreed students and contingent faculty.

As Andrew Ross (author of the highly-recommend “Mental Labor Problem” essay) puts it:

[T]he research university is behaving more and more like an adjunct to private industry in the “concentration of power upward into managerial bureaucracies, the abdication of research and productivity assessment to external assessors and funders … the pressure to adopt an entrepreneurial career mentality, and the erosion of tenure through the galloping casualization of the work force.

This is probably extremely relevant to a good portion of this blog’s followers and may prove a welcome eye-opener.
Posted by Unknown at 4:53 PM