Gilles Deleuze, The Logic of Sense 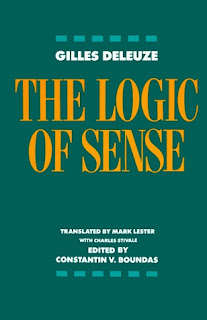 Considered one of the most important works of Deleuze, and long-awaited in English, The Logic of Sense begins with an extended exegesis of Lewis Carroll’s Alice in Wonderland. Considering stoicism, language, games, sexuality, schizophrenia, and literature, Deleuze determines the status of meaning and meaninglessness, and seeks the ‘place’ where sense and nonsense collide. Written in an innovative form and witty style, The Logic of Sense is an essay in literary and psychoanalytic theory as well as philosophy, and helps to illuminate such works as Anti-Oedipus.
Posted by Unknown at 10:56 AM

Email ThisBlogThis!Share to TwitterShare to FacebookShare to Pinterest
Labels: deleuze