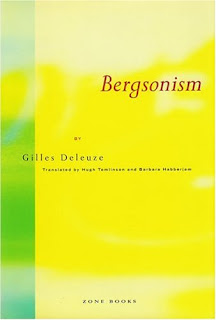 What is needed for something new to appear? According to Gilles Deleuze, one of the most brilliant contemporary philosophers, this question of “novelty” is the major problem posed by Bergson’s work. In this companion book to Bergson’s Matter and Memory, Deleuze demonstrates both the development and the range of three fundamental Bergsonian concepts: duration, memory, and the élan vital. Furthermore, Deleuze interprets and integrates these themes into a single philosophical program, arguing that Bergson’s philosophical intentions are methodological. They are more than a polemic against the limitations of science and common sense, particularly in Bergson’s elaboration of the explanatory powers of the notion of duration - thinking in terms of time rather than space. Bergsonism is also important to an understanding of Deleuze’s own work, influenced as it is by Bergson.
—Translated by Hugh Tomlinson and Barbara Habberjam
Posted by Unknown at 10:28 AM