Terry Eagleton, The Illusions of Postmodernism 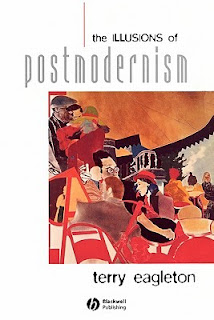 This brilliant critique explores the origins and emergence of postmodernism, revealing its ambivalences and contradictions. His primary concern is less with the more intricate formulations of postmodern philosophy than with the culture or milieu of postmodernism as a whole. Above all he speaks to a particular kind of student, or consumer, of popular "brands" of postmodern thought.

Although Professor Eagleton's view of the topic is, as he says, generally a negative one, he points to postmodernism's strengths as well as its failings. He sets out not just to expose the illusions of postmodernism but to show the students he has in mind that they never believed what they thought they believed in the first place. In the process his gifts for irony and satire sharpen the reader's pleasure, and his commitment to the ethical and the vision of a just society, inspire engagement and "a refusal to acquiesce in the appalling mess which is the contemporary world".
Posted by Unknown at 12:10 PM